We are here for your pets, We are operating curbside or in-office appointments please let us know which you prefer. Masks are required. COVID-19 protocols. 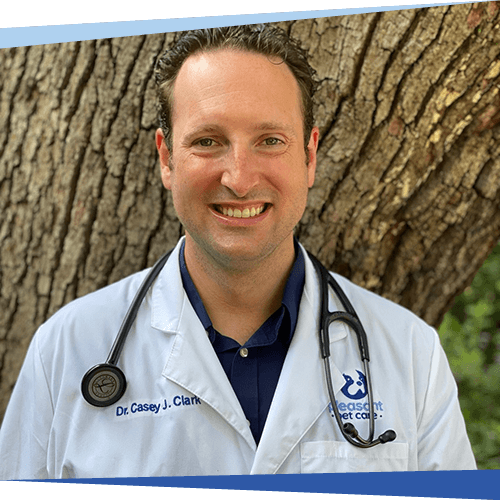 Dr. Casey J. Clark grew up in western Montana and was always surrounded by lots of animals both wild and domestic. Through the years his family primarily had cats and dogs but they even had a horse and a mule for a short period of time.

Casey’s journey to veterinary school was not a direct path. When starting his undergraduate studies at Montana State University, he had the intent to go to medical school as math and science were his favorite subjects. Over time, he realized that human medicine was not for him. He missed his pets while away at school so he decided to take his medical knowledge and put it to good use helping pets.

He attended Colorado State University where he received his DVM degree in 2009. It’s there where he met his best friend and now business partner Dr. Brian Foye.

Dr. Clark spent the last 8 years of his career as a beloved partner doctor, successfully expanding, Southwoods Animal Hospital in Greensboro, NC. He ultimately decided that he could best serve more families and pets by opening his own practice, Pleasant Pet Care. He has loved many pets over the years and has recently rescued a Shih Tzu – Terrier Mix, Memphis.